Here, I will be trying to provide my experience & the questions asked to me during the interviews with the organizations.
Please feel free to provide your comments & opinions.

Like others, I have also been through interview processes for various IT companies. And on other pages I started to put experiences during these processes in those companies. I also started giving my feedback on Glassdoor.
But today I just thought to write some more here about this.
I feel, Interview process is a very serious affair & both interviewer & interviewee need to be honest about the requirements/expectations & the strengths. But the irony is that both think the other as fool & consider him/herself superior than the other. And here the whole purpose of interview discussions goes in gutter.
Interviewers think that they understand the requirements & doing rocket science in their company. And they have everything in their mind with no need to Google for the solutions. On the other side, Interviewees keep on customizing their resumes as per the requirements or JD given, thinking it will be impressive for shortlisting. Rest interviewees get the good idea of the kind of question patterns in the respective organizations & they mug up those along with the buzz words to impress the interviewers.
Here is the main issue, interviewers in general should focus to understand the work done by the candidate in the previous projects & check about how that candidate can be useful, rest definitions are already over the internet. But candidates need to be honest here about their work also. And those silly Talent Acquisition team members should study the resumes properly rather blindly calling the candidates for the interviews.
But no one is honest to the other & everyone tries to fool the other, so many times if one honestly sees then will find the issues & conflicts later.

Below is the list of companies & my suggestion as per my experience during the work there or interviews with them or as per different resources & I will keep updating this list as & when I get more information & views about the companies.
Companies to avoid because the people & Interviewers of such companies have skewed mentally.
Companies like C2LBiz, Ciklum etc, ask to provide your ID proofs before your interview even & they will be showing that they follow processes, but they don't & they have low salary standards so don't get into their trap for the interview even if they claim
to give you high salary, at the end they they will show their true character.
Zensar like companies goes to the next level, as told by one consultant that Zensar will be giving lower salary due to gaps,
so I believe Zensar exploits the candidates to trap them on lowest salary in market.
​
1) Employee Referals:
a) Most of the times, emploee referal is not about bringing the talent in the company, its about bringing his/her known
person.
b) Many times referal is about personal monetary benefits also given by the company.
c) Sometimes people try to bring less competant people in their projects for their benefits.
In short, if someone is referring you in the organization, then it doesn't only mean a favor to you, reasons can be many.
​     As today, noone helps other with no personal benefits.

2) For profile shortlisting:
a) Many times, in the name of interviews, companies & consultancies just check the market & fetch the data from
candidates & then possibly be earning their money from your data.
b) If you see that you have 10+ years of experience and JD is saying about 2+ or 3+ years of experience & still you
get the call & your profile is being considered for that then it shows the unprofessionalism of managers in those
organizations & one whould avoid such companies.
c) During shortlisting, company claims that they are open for salary discussions or salary budget is open, then it is a red
signal that you should be aware about, as there is always some budget but these people try to play the mind games
with the candidate & will try convince you as per their lower salary during the last stage. So be aware about that.

3) For Interviews:
a) Interviewers ask questions mostly taken from Internet like from LeetCode kind of platforms which may not be related to
the kind of work you will be doing there. Many interviewers will be practising for their own interviews to move out of the
​         same company via such interviews.
b) Those coding questions can be requiring specific algorithm to solve or optimize the solution, but you are expected to
know that, though these interviewers themselves will be refering the internet & other solutions to solve those problems.
c) Most interviewers & selection process is skewed & biased & if you are coming from some big or competitor company
then you will be having more chance. Thats why you can observe that most employees keep on shifting in similar
companies only.
d) Most times, you may observe that interviewer is taking interview to find the reason to reject you & will be asking such
which require some analysis & R&D, but either interviewer just don't want you or just want some answer for his/her
problem in project from you via such fake interviews.
e) For your salary, people here can go to any Low, to exploit you or trap you at the lowest possible scenario.
Like they can delay other rounds if you clear initial rounds, they can pull you for the interview at your expected CTC
& then at the last they will play their games for the lower salary, or if you clear all rounds then again they will giving some
random reasons like as per the interview rounds feedback, we can't give you your expected CTC but their expectations
from you during the job will remain same.
So my direct suggestion is - If you observe any such behavior then simply reject such company from your side rather
giving them the chance to reject you or exploit you.

4) If in case you join:
a) As you are new in the existing team, then chances are that you will be cornered or may not be allowed to settle there.
All ethics, principles, honesty, character etc are on papers only, on ground it is bloody individual survival game only.
b) Multiple times, existing team members who cant contribute much they try to keep dependency over them by not giving
you the required information. So in short, you life will be sucked there.
c) Managers will give you any random to supress you during appraisals & others can be promoted for any random reasons.
​        Hope, we all know what different random reasons can be if the employee is he or she. :)
Or it can be your caste, religion, region, state, country, means anything can be the reason,
except your talent or capability.
d) You will see a lot of people who entered in that organization by faking their intelligence/experience & now taking heavy
salary doing nothing significant & will be just giving big talks or will be involved in cheap politics there. 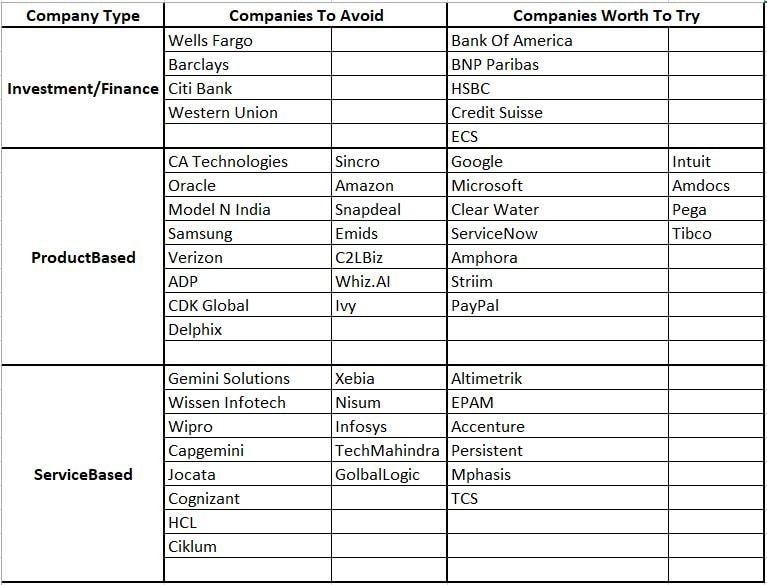 Reasons for the companies, as per my understanding & other feedbacks I got, I suggest not to try for & all the given reasons
don't apply for any single company, so use your own judgement also -
Finance Based :
a) If start-up, then max will be faking their growth.
b) Many companies, I was told, have toxic culture & everyone is trying to survive & grow there.
c) One can be exploited to work extra hours with no benefits & WLB will be on high risk.
d) Low job security.
e) Multiple fake interviews.

Product Based :
a) Hiring process is biased & not transparent. If the manager sees that one can't be tamed then that one will be rejected.
b) Working environment is toxic & many people will be faking their intelligence to mint the money.
c) Poor HR policies.
d) Wrong commitments during the start of the interview & if you make till last then you will be exploited to except the low
salary offer.
e) Less tech & financial growth & WLB will be on high risk.
f)  Hire & Fire policy, so no job security, even if you do your work well.

Service Based :
a) Low Salary, Low Salary & Low Salary with mediocre kind of work.
b) No tech & financial growth.
c) A few tech savvy projects with lot of low class work.
d) Poor Management & HR mindset, treat employees as resources not humans, thats why their HRs are true
Human Resources, as if you join there then you will be converted from human to mere Resource.
e) Fake & biased interviews & managers will be looking for a Slave in you during the interview.
f)  High Notice Period, which will be major blocker to get the next job.
g) These companies have worst HR policies where you will be expected to join them within 30 days, at max.
But their own NP will be 60-90 days...So crossing all the limits of hypocrisy.
h) Accenture like companies have employees who just try to exploit the Referal Schemes, such schemes are to refer the
whom current employee knows, but people have made it their business, they post over LinkedIn or other social sites to
get the resumes & refer them to earn money. Though it helps many to get the job but the companies must also treat any
such referals like normal applications.